Wherever you look these days, there's evidence of the economic fall-out of the coronavirus pandemic. The Federal Reserve has lowered rates, again. Stocks are in bear market territory. Unemployment claims are climbing. Businesses are shutting down.

Taken alone, any one of those factors might not indicate a recession. But add them together, and it's starting to look like a recession is imminent, or even already in progress.

The good news? In and of itself, that’s nothing to be worried about. Recessions are part of the natural economic life cycle and a good, long-term, diversified investment plan already takes them into account. But there are steps you can take today to prepare for an extended economic downturn.

You might best remember a recession from your experience in 2008 to 2009, when the Dow Jones Industrial Average bottomed out at less than 50 percent of its 2007 high. But, unlike bear and bull markets, you don’t define a recession solely on market index performance.

Recessions are hard to quantify, but economists typically define them as two or more consecutive quarters of negative growth of the country's gross domestic product (GDP), or the total value of everything that the country produces.

They generally happen when there's a significant decline in economic activity. Indicators include a drop in employment, manufacturing activity, consumer confidence and, yes, stock prices—all of which were happening in March 2020, in large part as a result of the coronavirus outbreak.

Indeed, Goldman Sachs, JPMorgan Chase, Bank of America and others now say the U.S. is already in a recession. Goldman Sachs released a revised forecast in mid-March projecting that the U.S. economy would shrink by 6 percent in the first quarter and a stunning 24 percent in the second quarter as a result of the pandemic.

How long does a recession last?

On average, a recession lasts about 11 months, according to the National Bureau of Economic Research. But they can be shorter and milder, or longer and more severe, as we know from the Great Recession of 2008 and the Great Depression of 1929. Still, even in extreme cases, the stock market has always recovered. And so has the economy.

In the case of the Great Recession, it took about four years for the Dow Jones Industrial Average to reach a new high after bottoming out in 2009. But along the way, investments still made gains, and long-term investors who maintained regular contributions throughout the recession were best poised to reap them.

What happens in a recession?

Typically, unemployment rises and hiring slows. You may also see wages stagnate or even decline. Companies may announce mass lay-offs, as has already happened at some businesses that have been hit hard by the shutdowns in the wake of the coronavirus outbreak.

Consumer spending typically falls as Americans have less money to spend and even those who are still working may worry about their continued employment. Government debt tends to rise as the government passes bills to stimulate the economy and help those in need. (Congress is currently considering a nearly $2 trillion stimulus package.)

Stocks and other assets can lose value as investors panic sell, or sell investments for needed cash, and the demand for certain assets declines. If Americans lose their income, or fear they may in the near future, they're less likely to buy a new home or new car, for example.

As the economy starts to recover, those trends will shift. 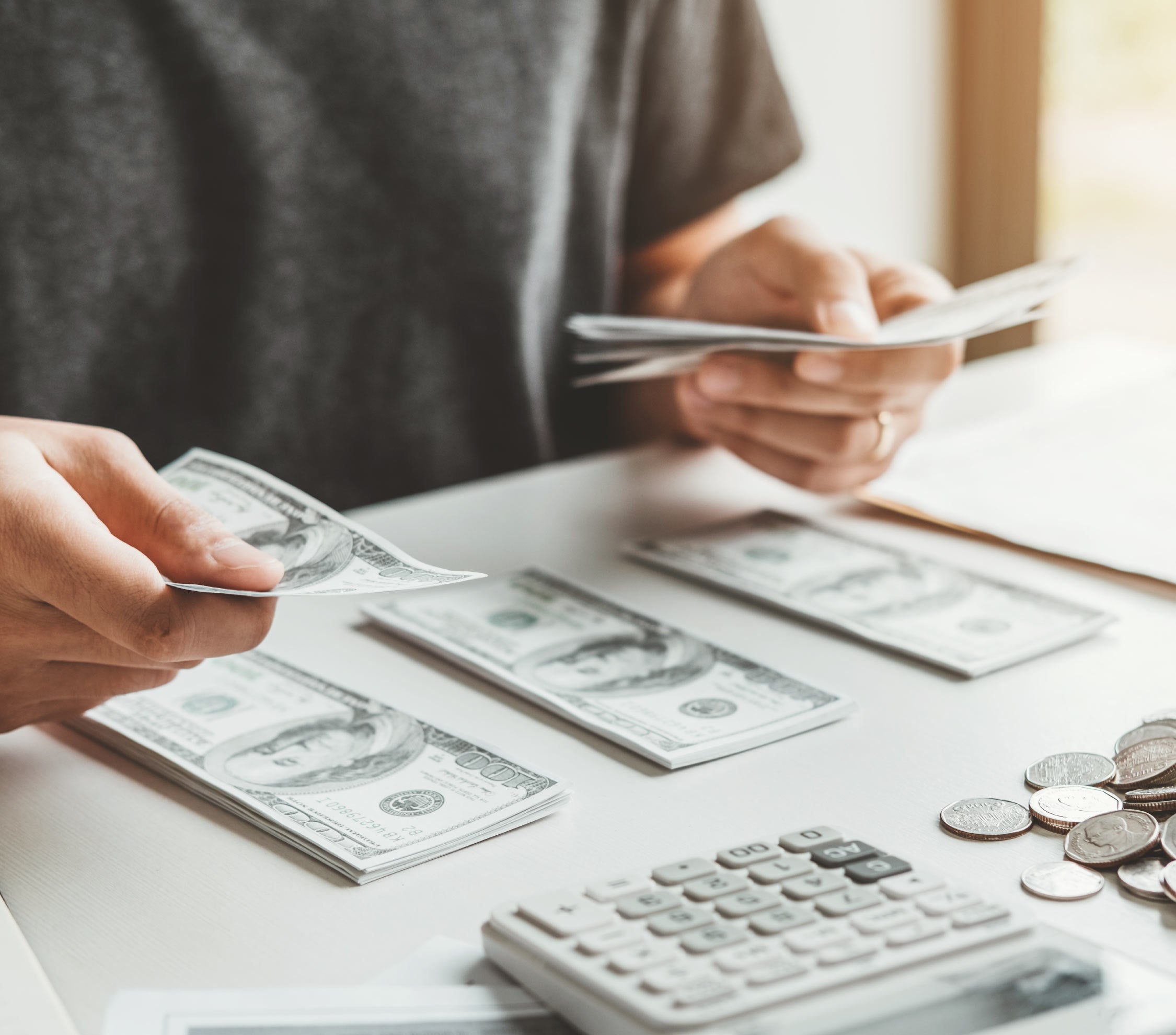 How do you prepare for a recession?

Just because you know that historically all recessions have ended and led to even greater economic growth, that doesn’t make the prospect of facing one any easier. But there are a few simple steps you can take now to recession-proof your life.

1. Build up an emergency fund

Most of us probably know we should have an emergency fund equivalent to three to six months of living expenses. But when the economy’s doing well, it can be easy to shrug it off as something you’ll get around to eventually.

As talk of a recession grows, though, it’s wise to turn your attention to your emergency fund. Unemployment is rising, and should you find yourself out of work for a few months, you’ll want to be able to tap into cash reserves.

Tally up your expenses for the month and then multiply that by three, four, five or six, depending on how many months’ cushion you’re aiming to give yourself.

If that number looks intimidating to begin with, don’t stress. Set a goal to reach at least a $1,000 fund and start small with a recurring daily, weekly or monthly deposit into your savings account. (Research tells us it’s much easier for us to build savings when we automate it.)

From there, continue to increase your contribution if you're able until you’ve reached at least three to six months of expenses.

Bonus: To help protect your money from inflation (the amount the cost of goods and services increases), look for high-yield savings accounts. These accounts can offer interest rates 10 to 20 times higher than the national average of .09 percent, better helping your money maintain value over the long term.

As you’re adding up your expenses to determine what your emergency fund should be, take a moment to look at your overall spending. If you don’t already follow a budget, now might be a good time to start.

Most experts recommend a general framework of 50/30/20 budget, where half of your income goes to necessities, 30 percent to wants and 20 percent to saving, investing and paying off debt. If you haven’t worked with a budget before, a 50/30/20 approach may be a good place to start. Other popular budgeting techniques include envelope budgeting, zero-based budgeting and pay-yourself-first budgeting. The method you choose, though, is less important than making sure your total spending adds up to less than your income for a month and that you’re setting aside a healthy portion for retirement and other future needs.

When you look at your spending, look for easy areas to slash, starting with mindless spending. This can be anything from impulse purchases to recurring subscriptions you don’t use. With shelter-in-place mandates in many cities, it's easier to cut down on transportation costs and spending on eating out and entertainment. Just be careful of how much you spend on take-out and online shopping.

3. Get ahead of any debt

If you have any debt, now is the time to put repayment plans into place. Should you find yourself with less income in the future, you'll want to make sure you’ve minimized or repaid what you owe so your debts don’t mount during a downturn. First, list out all of your debts, making sure to note the amount you owe and the interest rate associated with it.

Then consider one of these popular payment methods:

It can seem counterintuitive, but during a recession, you probably don’t want to stop your regular contributions to your investment accounts, whether that’s your 401(k), Individual Retirement Account (IRA) or a taxable brokerage account.

While it can be stressful to put money into a downward-trending market, it allows long-term investors to benefit from what are essentially sale prices on investments. Over the years, this can allow you to scoop up shares at fractions of their later values and help you pay less per share overall, thanks to dollar-cost averaging.

Take this example: Let's say you started investing $50 a month in an S&P 500 fund in March 2006, two years before the bottom of the Great Recession. If you left your money untouched and continued regular $50 monthly contributions, you would have had more than $12,000 by March 2018, assuming you reinvested your dividends. That’s a growth of about 70 percent, or $5,000, over the base amount you invested.

You might think you could game the system by taking your money out of the market at its high and then reinvesting it when it hits its bottom. But timing the market is notoriously hard to do and can drastically curtail your earnings if you miss days when the market makes large gains.

During a recent 20-year stretch, investors who took their money out of the market and missed the top 10 days of trading would have seen their returns fall by almost half, to 4.5 percent, according to one Schwab analysis.

Those who kept their money invested, on the other hand, saw average annual gains of about 8 percent.

It’s almost impossible to time the market, but by maintaining regular contributions to your investment accounts, you position yourself best to benefit from any future upswings.

5. Refine and diversify your skill set

Unemployment is rising, which can lead to a vicious cycle of companies laying off workers who then have less money to spend, forcing more companies to downsize (and then more workers to be let go).

But a rising unemployment rate doesn’t mean that all companies stop hiring or even stop expanding.

To best position yourself to keep your current job, look for opportunities now to take on new responsibilities at work. During an upward-trending market, this can position you for raises or promotions, but as things become bleaker, it can make you indispensable at the office.

Outside of your full-time job, search for ways to diversify your income stream, like through side hustles you can do remotely that allow you to learn new skills and earn more money.

While no one can predict exactly when a recession starts or ends, you can position yourself now to avoid a lot of its brunt. Markets rise and fall and rise again. Jobs come and go. But historically, every downturn has ended in an upturn. Preparing now can help you weather the worst of it and be better positioned to benefit when the economy does turn around.

This article was updated in March 2020.