Working in The Restaurant Industry: What You Need to Know 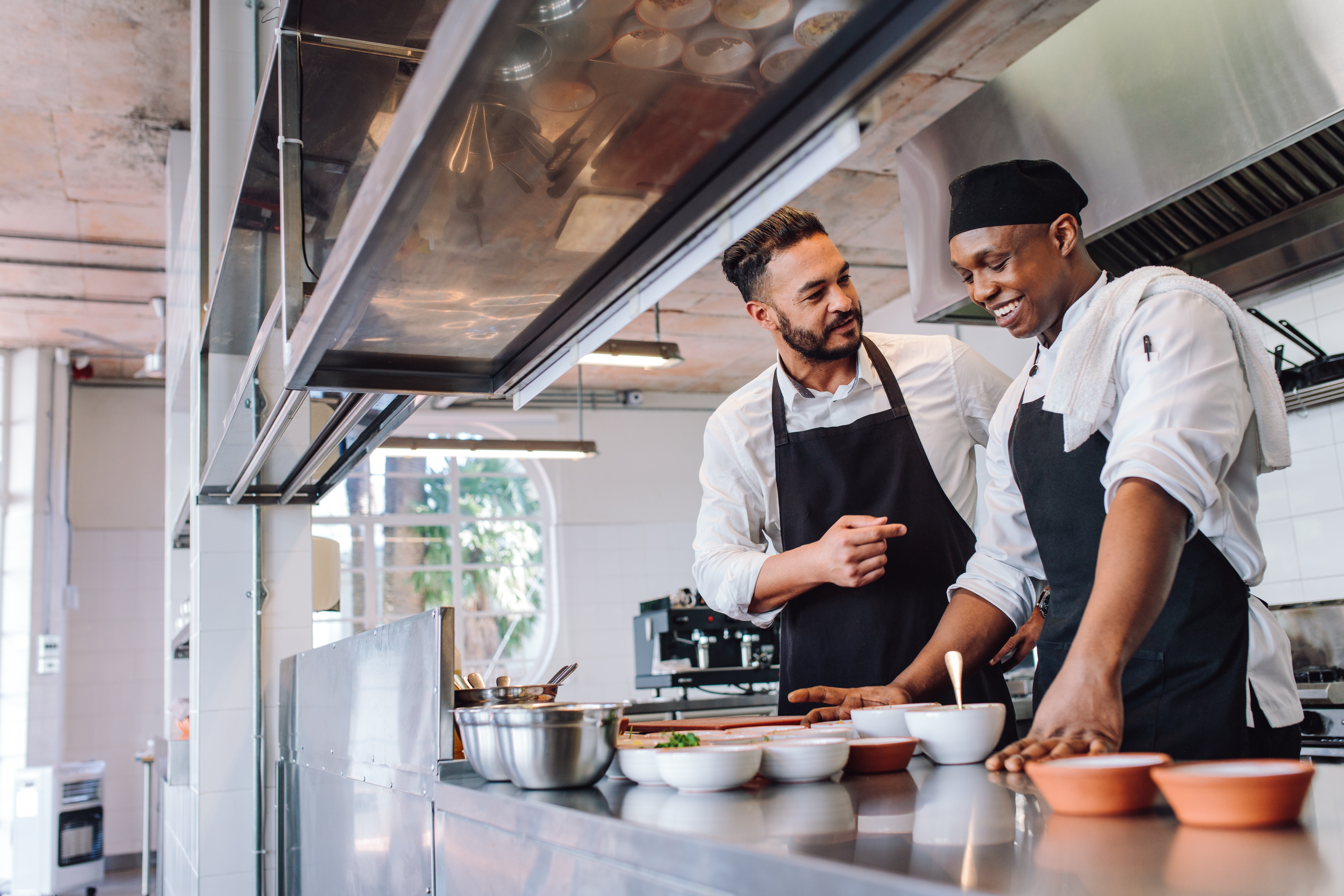 Jena Ellenwood, 36, had been working as a bartender in New York since the early 2000s when the pandemic hit. At that point she was splitting time between a bar in Manhattan and two restaurants in Queens and Brooklyn, hoping to make the $1,000 per week she needed to cover living expenses, student loans, and credit card debt.

“I was working seven days a week,” she says, because “I just never felt like I was caught up enough” financially. “You’re at the mercy of the customer,” she says. “And what if you’re not busy?”

When the pandemic hit and her bar and restaurants shut down, Ellenwood needed to figure out how to pivot. She’d been teaching cocktail classes through one of her employers, Dear Irving, and offered to help them take the classes online. Requests began coming in for her to teach privately, and she ended up starting her own business. Whereas she hoped to make $250 per 6 to 10-hour shift before the pandemic, today, her cocktail classes go for a minimum of $250 per hour.

She still teaches in person a couple of times a month, but between the various virtual classes she has going and collaborations designing cocktails for a given brand or company, she has no interest in stepping back behind the bar. “I’m not ready to be at the mercy of a customer,” she says. “I’m not ready to be told via their tip how they think of me. I don’t want to work till two or four in the morning.”

Ellenwood’s pivot early in the pandemic put her at the forefront of a bigger trend, one that’s shaking up the restaurant industry.

Ellenwood is one of millions of restaurant workers who’ve stepped out of the industry since March 2020, most recently as part of the Great Resignation. In October 2021 alone, 803,000 food service workers quit their jobs, according to the Bureau of Labor Statistics. 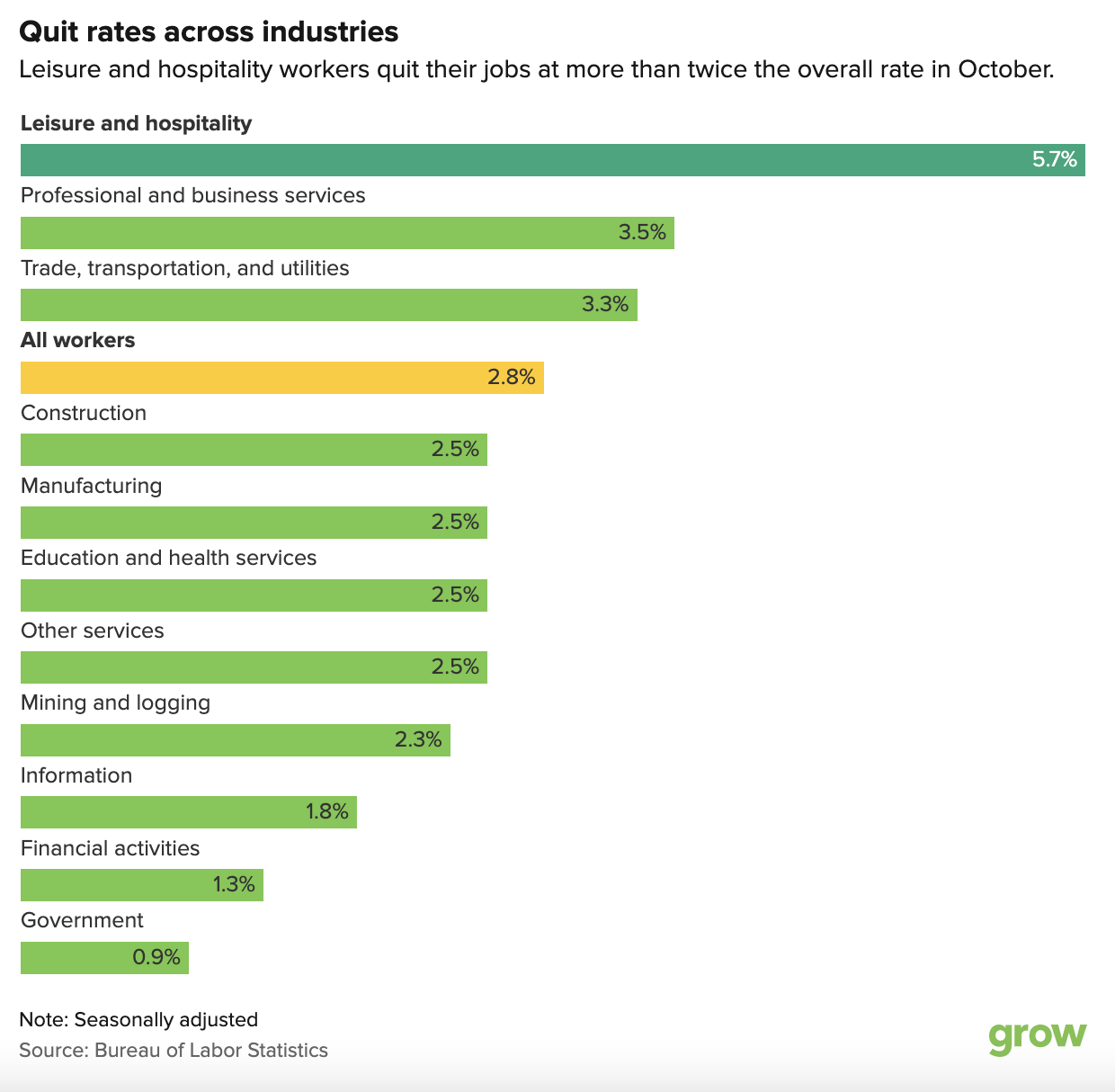 Many cite the basic parameters of the job as their reason for leaving. More than half, 55% of former hospitality workers say they’re not interested in returning to the industry because of low pay, and 39% say they won’t return because of lack of benefits, according to a Q3 Joblist survey of 1,481 current and former hospitality workers. The group was part of a larger survey base of 26,278 job seekers across all fields.

With demand for labor in the industry so high, major employers have started to respond to worker asks. In May, McDonald’s announced that workers at the company-owned restaurants (which make up 5% of McDonald’s U.S. restaurants) will have an average of 10% pay raises over the following months. The same month, Chipotle announced it was raising its hourly rates for starting crew members to between $11 and $18 per hour. In October, Starbucks announced it would raise its base pay for U.S. baristas to $15 per hour by summer 2022.

“It’s truly a defining moment for all strata within the restaurant industry,” says Carolyn Richmond, an attorney who’s long represented restaurants. But she and other experts say food-service jobs are still a long way off from offering sustainable pay and benefits as an industry.

A general manager at Burger King makes $46k/year in Chicago

The food services industry is multifaceted, made up of tens of thousands of small mom-and-pop spots, national food chains, fine dining restaurants, and so on. What workers make and the benefits available to them depend on various factors.

Each establishment has its own available resources and pay structure, for example. Packages also depend on the role a worker plays in the business. Dishwashers and cooks might make minimum wage with no benefits, for example, while chefs might make well above minimum wage with benefits like health insurance, retirement plans, and PTO. Bartender and waiters’ pay may depend on tips.

Finally, location plays a significant role in what kind of pay and benefits restaurant jobs offer. Sixteen states and the District of Columbia have sick leave mandates for employers, according to the Society of Human Resource Management. Nine states and the District of Columbia have their own paid leave policies as well, including parental leave. Workers in these states would have access to these benefits regardless of position.

‘There’s only so much you will pay for a hamburger’

Although changes have been made in big chains that have the resources, at this point, it’s unlikely all food service workers will have access to sustainable hourly pay and benefits like health insurance and PTO in the near future. “Profit margins are so tight” in this business, says Richmond. You “have lots of small family businesses and single operators that may want to provide better wages,” she says, “but may still have to really just provide what the bare minimum is” because it’s all they can afford.

If a lot of small restaurants or bars did want to raise hourly rates for their low wage workers, for instance, or to start paying for health insurance, the cost would have to be transferred over to the customer in the form of more expensive meals. “And we all know there’s only so much you will pay for a hamburger,” she says.

For sweeping change to take place industry wide, legislation would likely have to move the needle forward. The Build Back Better bill, for example, currently being deliberated in the Senate, includes a provision for one month of paid leave covering caregiving, parental leave, and long-term illness. The government would cover the cost of those weeks for employers, making it easier for small businesses to give workers that time off.

“I think we’ll probably see more clarity as to those types of benefits over the next 6 to 12 months,” says Richmond, adding that with the federal mandates, “it’ll be a little bit easier to implement those plans going forward.”

Tough job conditions: It was not uncommon ‘to be there for 12 hours’

Ultimately, the practicalities of work in food services are only part of the problem and the reason for workers’ exodus. The strenuous conditions of the job play a part, too.

After 11 years as a pastry chef at some of the most renowned companies in the restaurant world, Tracy Wilk, 33, left the industry in June. She now works at tech company BentoBox.

Wilk had worked her way up from making $10 per hour as an intern to making $70,000 per year with benefits as an executive pastry chef in New York. Even with the PTO, though, she rarely felt like she could take time off. She recalls one busy Restaurant Week when “extreme tooth pain” sent her to the dentist. She ended up getting a tooth pulled but “I worked that night and I helped expedite dinner service because someone had to,” she says. 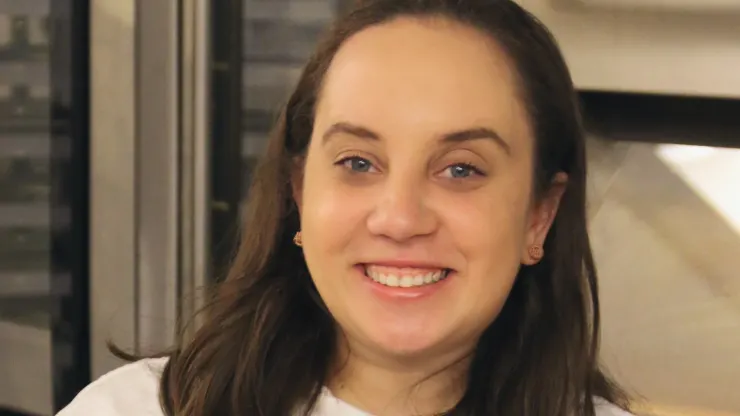 “It was not uncommon for any of us to be there for 12 hours,” she says, adding that it was “work that wasn’t going to get any easier.” So she left.

Besides the grueling hours, frontline workers like waiters, hostesses, and bartenders must contend with unwanted attention from the public. An overwhelming majority of women restaurant workers, 90%, report experiencing sexual harassment on the job, according to the Restaurant Opportunities Center.

And with the pandemic, daily contact with dozens of patrons puts these workers in even more danger. A 2021 University of California, San Francisco, study found that line cooks had the highest risk of mortality early in the pandemic. The study looked at excess mortality among Californians aged 18–65 from March through October 2020.

Researchers estimated that during that time, line cooks had a 60% increase in mortality associated with the pandemic, compared to a 34% increase for licensed practical and licensed vocational nurses, and a 22% increase across all working-age Californians. 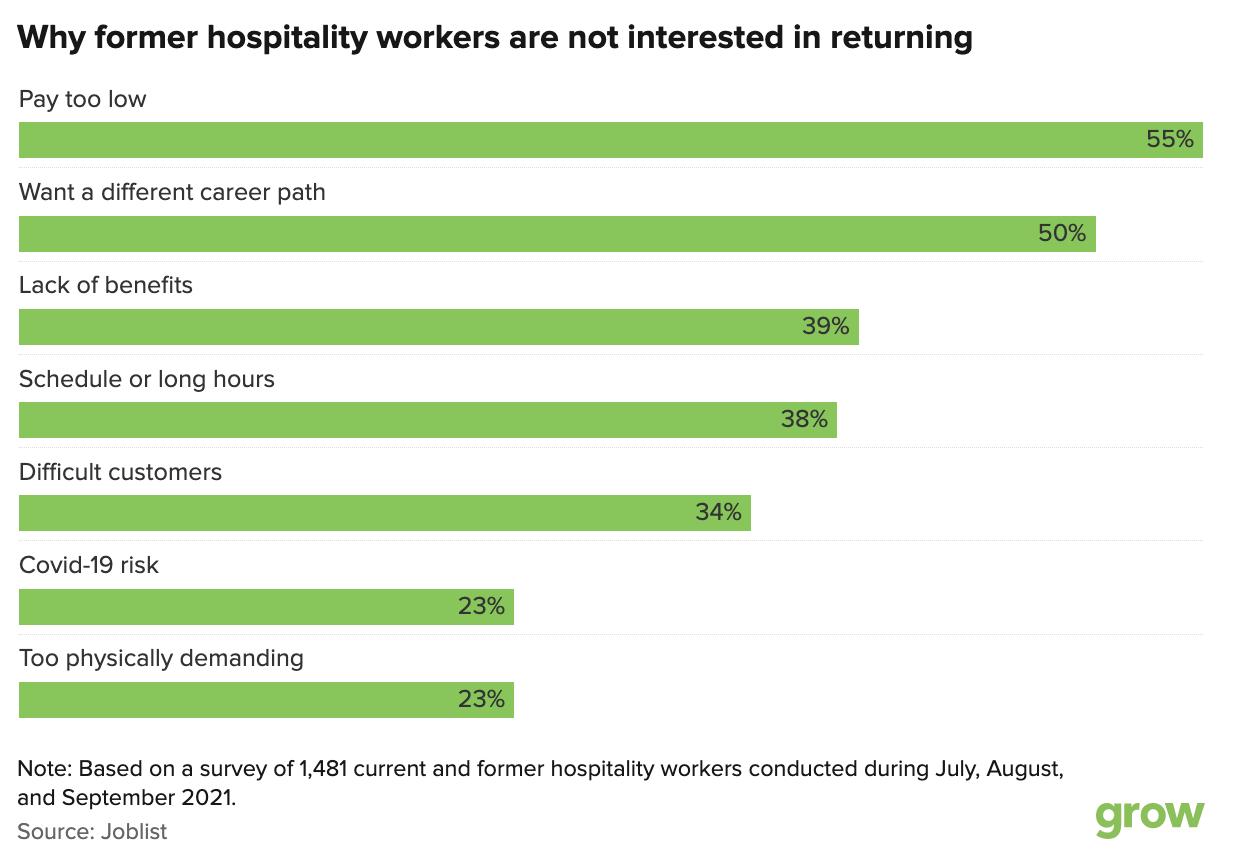 For the moment, if you work in the food services industry or want to, there are asks you can make to which employers could be more open or able to accommodate.

Especially in the wake of the pandemic, “flexibility is really important,” says Rachael Nemeth, CEO and co-founder of Opus, which provides mobile-first training to the deskless workforce, including clients in the restaurant industry. A flexible schedule is “decidedly lower cost than being able to offer health benefits to your team,” she says.

“Commuter benefits matter,” too, says Nemeth. Transportation gets expensive and these “are really tangible benefits” for employers who could say, “we’re going to cut you a break on your MetroCard,” she says.

At least for now, if workers’ asks aren’t being met, “this is a moment when they are slightly less vulnerable because they’re in such high demand,” says Ileen DeVault, a professor of labor history at Cornell and director of the university’s The Labor Institute. “So they can vote with their feet.”

Investing involves risk including the possible loss of principal. This content is for informational purposes only and is not intended as investment advice. The strategies and investments discussed may not be suitable for all investors. Carefully consider your financial situation, including investment objective, time horizon, risk tolerance, and fees prior to making any investment decisions. 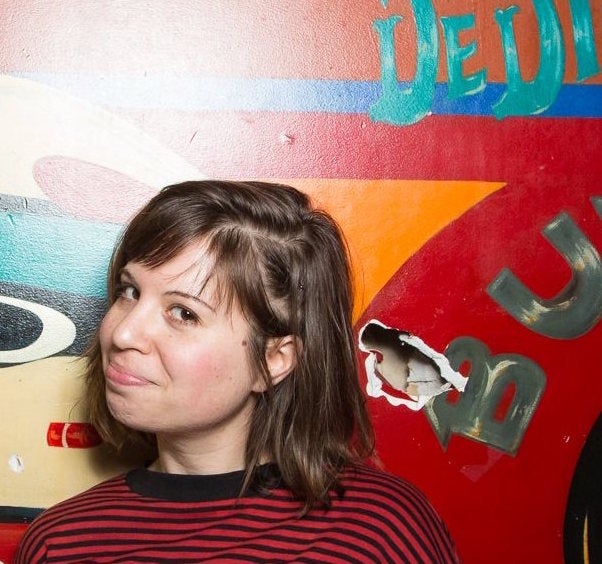