If you’re of a certain age, you might have first-hand experience with the Great Recession of 2008. And if you’re a bit younger, you may have seen the financial crisis wreak havoc on your family or neighbors.

After more than a decade of economic expansion, it looks like the fall-out from the coronovirus pandemic has tipped the country into a recession again. Here's what a recession is and what it might mean to you.

The real definition of a recession

While recessions are hard to quantify, typically economists peg a recession as two or more consecutive quarters of a negative growth rate of gross domestic product (GDP)—which is the total value of everything that the country produces, as assessed by the Bureau of Economic Analysis (BEA).

That can be an easy, measurable way to determine if you’re in a recession—which is why it’s a popular definition. However, the National Bureau of Economic Research (NBER) chooses to be a bit less precise and more inclusive of various economic factors. It defines a recession as “a significant decline in economic activity spread across the economy, lasting more than a few months, normally visible in GDP, real income, employment, industrial production and wholesale-retail sales."

This is what we began to see in March 2020, in large part as a result of the coronavirus outbreak.

What to look for: the signals of a recession

Here are some of the indicators that raise warning bells a recession might be imminent:

As mentioned, for some, this is “the” number, but it should just be one closely watched number among many as an indicator that the economy is wavering.

The Department of Labor publishes a monthly report on the job market, which summarizes factors such as how many jobs were created in each sector, what percentage of the population was unemployed and how many hours were worked, both full-time and part-time. This last part is important because when businesses are worried, they are more apt to hire part-time labor and are liable to cut hours.

In the wake of the coronovirus outbreak, thousands of businesses were forced to shut down, at least temporarily. Unemployment claims surged as a result, and economists predict that the March jobs report will reflect that.

While economics appears to be cold, hard math, it’s also influenced by how people are feeling. There are a number of organizations that take a pulse on current sentiment, including The Conference Board, University of Michigan and the National Federation of Independent Businesses. When consumers feel unsteady, they are apt to pull back their spending, which causes sales to fall.

The Leading Economic Index, another report from The Conference Board, is comprised of 10 components that include jobs data, building permits, stock prices and manufacturer orders, among other factors, to indicate how healthy the economy is and how buoyant businesses feel. 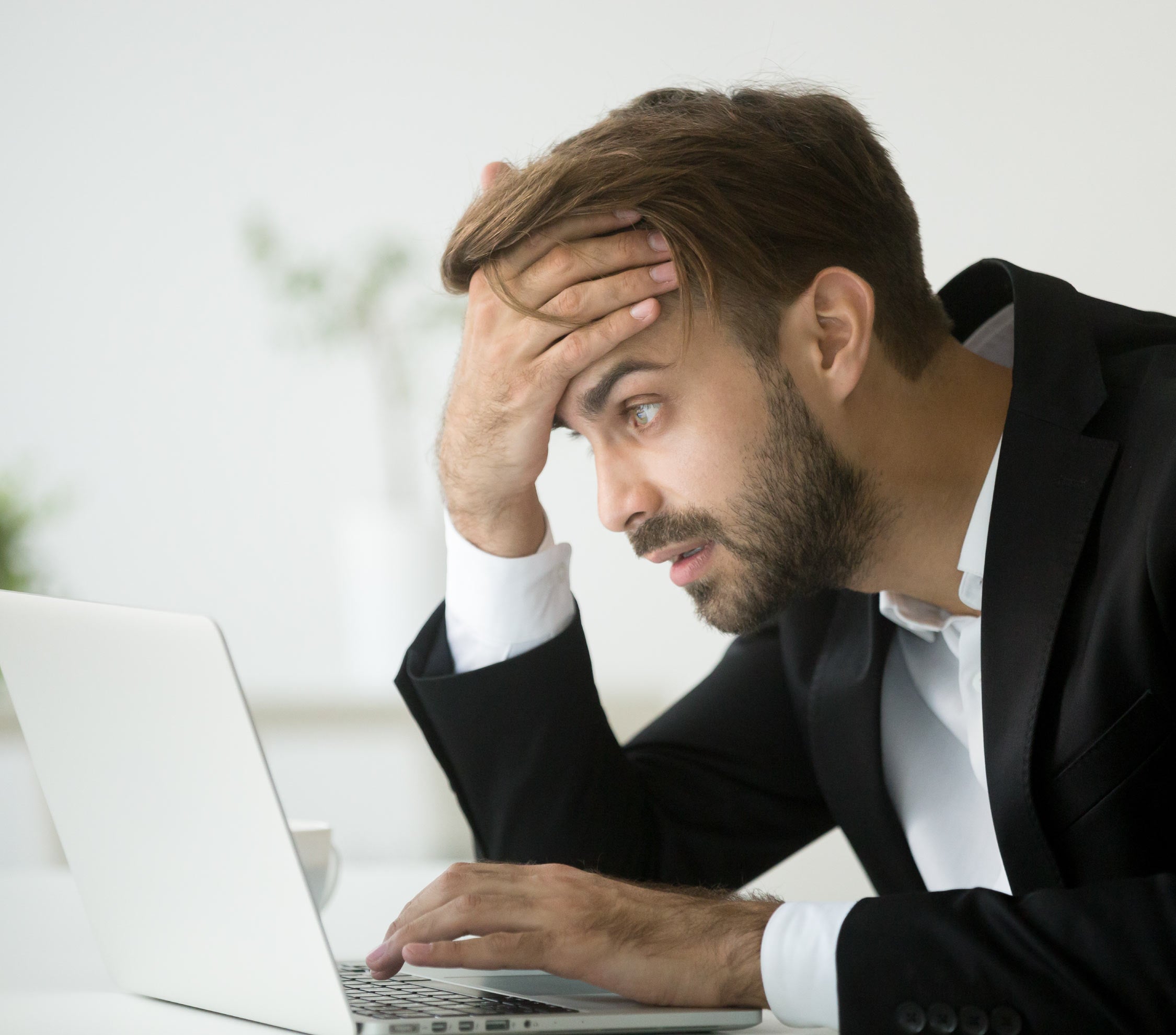 While the signals cited above can set off those warning bells, they don’t actually cause a recession. It's often the following economic situations that can precipitate a recession:

When the cost of goods and services rise, this is known as “inflation.” These rising prices mean that consumers have to spend more of their money to buy the same things they did before, and can lead to spending cutbacks as they aim to stretch their budgets. But then deflation can occur, which reduces the value of things and can cause consumers to wonder where the bottom is. They stop spending while they wait, which leads to a decrease in demand, which means companies need fewer people to produce their goods and services. Fortunately, the Federal Reserve Board is on the job, tweaking interest rates in an effort to sustain equilibrium.

What happens when you blow a bubble and it gets too big? It pops. All at once. That’s what can happen when consumers are too enthusiastically snapping up a certain item—such as real estate or stocks—expecting it to keep expanding, as in getting more valuable. When it becomes clear that specific asset isn’t going to continue to rise in price, a huge sell-off can follow—think a stock market crash or plummet in the housing market. The ripple effect is that the whole stock of that “item” is effectively devalued, which can send the economy into a recession.

When consumers are worried about their economic future—their job seems uncertain or their investments have lost value—they tend to go into hibernation mode and stop spending. Of course, when consumers stop spending, businesses need to produce fewer goods and services. So they employ fewer people, making everyone feel less secure about their jobs. And the cycle continues.

One closely watched report is the Institute for Supply Management’s “Report on Business” that tracks elements such as new orders, production, inventory, supplier deliveries and prices. As mentioned above, keeping the machine of industry humming is a key factor of a healthy economy so it can be worrisome when things slow.

What’s the impact of a recession?

An economic downturn can be devastating for both business and personal lives, and of course, the two are intertwined.

Say a company makes widgets, and starts seeing its sales and profits decline. It will likely decide to make fewer widgets, which means it needs fewer employees running the assembly line and selling the widgets to stores. From there, the effects ripple to many tangential businesses adjacent to the primary widget-maker. If they are manufacturing fewer widgets, they need less machinery, so it affects the machine makers and repair people. Retailers have fewer widgets on their shelves, so their sales decline. And the widget-maker might decide that it doesn’t want to start a second line of widgets after all, so it stops investing in research, design and marketing.

The livelihoods of all those associated employees are then affected, which can shake their confidence. They, in turn, buy less of other companies’ widgets, and all the widget-makers are suddenly in the soup. People are also less inclined to dine out, travel, upgrade their homes, etc. They might even stop paying their bills, causing even further distress for providers of goods and series. It’s easy to see how the cycle feeds on itself. As everyone pulls back, a recession begins.

As this spending decline deepens, the stock market is likely to fall since companies are making and selling fewer widgets. Consumers might lose their jobs, or have their hours or wages reduced. At that point, they can have trouble paying their bills, which leads to credit troubles, and in extreme cases, bankruptcy.

We're seeing some of these effects already as a result of the coronavirus outbreak. Businesses are shutting down (some temporarily), millions of workers are being laid off from full-time work or  losing contract work. So they have less money to spend and may also have trouble covering their bills. The government has been stepping in to try to mitigate the effects with a $2-trillion stimulus plan that would send cash payments to Americans, create a fund to lend to small businesses, and increase (and expand eligibility for) unemployment benefits.

What’s the average length of a recession?

The good news (if we can call it that) is that on average, a recession lasts about 11 months, says the NBER. But they can be shorter and milder, or longer and more severe, as we know from the Great Recession of 2008, or even catastrophic, like the Great Depression of 1929.

But when considering history as a whole, we can assume the next recession will be of the milder and shorter variety.

What can I do to prepare for a recession?

Is a recession imminent? Well, we haven't experienced two quarters of economic contraction yet, but it certainly appears that we've entered recession territory. Indeed, Goldman Sachs, JPMorgan Chase, Bank of America and others say the U.S. is already in a recession and predict GDP will be down for the first and second quarters of this year.

So, what can you do? The best strategy is to maintain sound financial habits that you should adhere to all year long, such as carefully budgeting and watching spending, building an emergency fund and saving aggressively. (And if you don’t already do these things, there’s no time like the present to start cultivating these habits!)

1. Don’t panic, but be cautious

This is the time to be more mindful than ever about your spending. Focus on covering the essentials and look at what purchases you can put off or skip entirely, so that you can shore up your savings in case you do lose your income. With travel on hold, and many bars and restaurants closed except for take-out, there are opportunities to trim spending in those categories. You can also save by buying key items—like paper goods and pantry items—in bulk.

What would happen if you lost your job? Do you have a skill that you could put to use in a side gig? And could you start using it today to improve your marketability and/or build up an extra cushion in your emergency fund? Being prepared is always the best antidote to a surprise job misfortune.

In addition to bulking up your emergency fund, you might want to have an extra stash of cash on hand so that you don’t have to sell stocks when they're down or incur penalties by taking funds out of your retirement accounts to stay afloat if you hit rough water.

It’s natural to be fearful in the face of a recession. But taking steps now to safeguard your finances can help keep you on more solid financial footing.