If you’ve ever visited a bank’s website, read their mailers or watched their commercials on television, you’ve probably heard or read the phrase “FDIC-insured” dozens—if not hundreds—of times over the course of your life.

But what does that phrase actually mean? What is the FDIC and why is it so important to banking? And what role does it play in keeping your money safe?

Below we answer these and other common questions about the FDIC so that you can feel more confident when choosing a bank or other depository institution for your money.

The Federal Deposit Insurance Corporation (FDIC) is a federal agency that promotes the stability of the U.S. financial system by bolstering public confidence in banks and other depository institutions under its purview. It achieves this goal by fulfilling a number of obligations designed to protect depositors. The most well-known of these obligations is providing deposit insurance to individual depositors, which protects their money in the event of a bank failure. It generally insures up to $250,000 per depositor per institution, per account category. (We’ll explain this in more detail below.)

Why was the FDIC created?

In order to understand why the FDIC was created, it is first important to understand the financial climate into which it was born. Prior to the establishment of the FDIC, if a depositor had money in a bank account and the bank went out of business, filed for bankruptcy, or otherwise failed, that money could be lost.

During periods of economic crisis—such as the Panic of 1907 and the Great Depression of 1929—the risk of banks failing increased as a panicked public rushed to their banks to empty their accounts. These events, called bank runs, could shutter an otherwise healthy bank over the course of a few days as depositors tried withdrawing more cash than the bank physically had on hand in its vault.

Though there had been many attempts between 1893 and 1933 to establish a federal deposit insurance, the plan did not come to fruition until the Great Depression, which rocked consumer confidence, triggered bank runs and caused thousands of banks to fail.

President Franklin D. Roosevelt then signed the 1933 Banking Act into law, which established the FDIC and empowered it to insure deposits up to $5,000—the equivalent of roughly $100,000 in today’s money. (The max has since climbed to $250,000 per depositor per institution.) The law also initially funded the agency with loans from the U.S. Treasury and the Federal Reserve, outlined federal oversight of commercial banks and separated commercial and investment banking (in what became known as the Glass-Steagall Act). 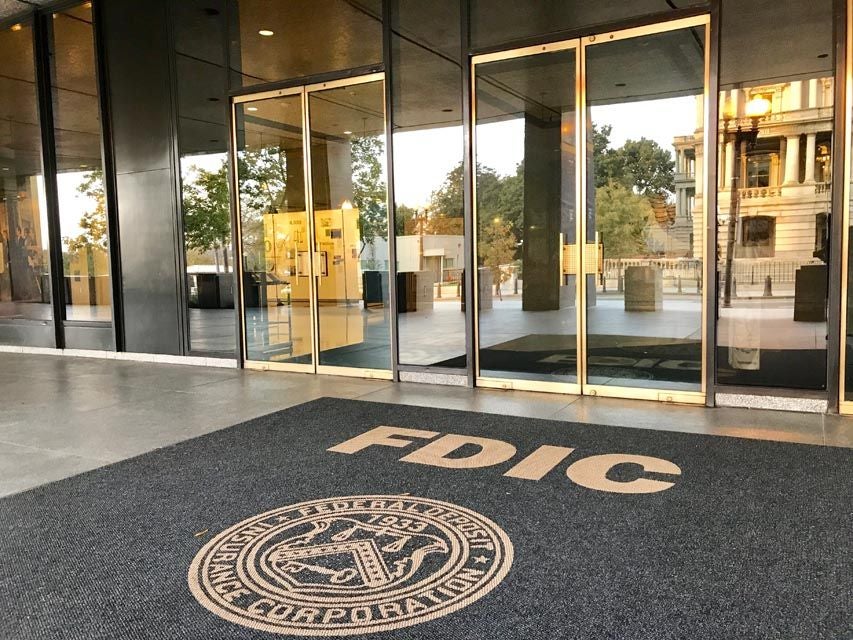 What does the FDIC do and how does it work?

As mentioned above, the FDIC is perhaps most well-known for providing deposit insurance. That being said, it has other duties and obligations as well, all of which are designed to offer stability to the U.S. financial system.

In order to promote confidence in the U.S. banking system and prevent economy-stifling bank runs, the FDIC provides deposit insurance to FDIC-insured institutions.

In the event that a member bank were to fail, the FDIC is capable of taking one of a number of steps in order to protect the insured funds:

It’s important to note that since the establishment of the FDIC, and the creation of deposit insurance, no depositor has lost money due to the failure of a member organization

While many people believe that the FDIC is funded by Congress, this notion is incorrect. The FDIC collects risk-based insurance premiums from each member institution, which it then uses to monitor member activities and replace insured funds in the event of a bank failure.

According to the FDIC's website, the agency insures trillions of dollars worth of deposits at U.S. banks and thrift institutions.

What are the FDIC insurance limits?

The FDIC provides dollar-for-dollar coverage on money held in covered accounts—up to a limit. Typically, the FDIC will replace up to $250,000 per covered account. If an account holds funds in excess of $250,000, those funds above the limit are considered to be uninsured funds. In the event of a bank failure, a depositor may still be eligible to receive a portion of their uninsured funds, but this is not guaranteed.

Depositors who hold more than the $250,000 covered amount in a single account have a number of options available to maximize their protection. Individuals who would prefer to keep all of their money with a single bank or institution can increase their protection by splitting the money into different account categories. Individuals who would prefer to keep their funds within the same account category, and who are comfortable splitting their money amongst multiple banks, can simply open a new account at a different institution.

What kinds of accounts does the FDIC cover?

Generally speaking, the following types of accounts held in an FDIC-insured institution are considered to be covered:

Similarly, certain financial products issued by a member bank, like a cashier’s check or money order, can also be FDIC-insured.

Other financial products that may be offered by financial institutions are not eligible for deposit insurance through the FDIC. These include:

How the FDIC provides banking oversight and consumer protection

In addition to providing deposit insurance to banks and thrift institutions, the FDIC performs a number of oversight activities which are similarly designed to promote stability within the banking system.

1. Examining the financial health of banks and institutions

In order to reduce the risk of bank failures, the FDIC regularly examines the financial health of the banks and institutions that it insures. These examinations are used to ensure that a single bank does not take on an excess amount of risk; to determine insurance premiums paid by each bank; and to ensure operational safety. Additionally, as mentioned above, the FDIC becomes directly involved when a bank does fail in order to coordinate liquidation and cleanup of the bank’s accounts and assets.

2. Monitoring that banks are complying with consumer protection laws

The FDIC also monitors whether or not each bank it insures complies with consumer protection laws such as the Truth-In-Lending Act, the Fair Debt Collection Practices Act, the Fair Credit Billing Act, and the Fair Credit Reporting Act. This oversight is designed to ensure that consumers are treated fairly and not taken advantage of by their banks.

In addition to monitoring banks for compliance, the FDIC also responds to consumer complaints and promotes consumer education in various forms.

How the FDIC protects your money

The FDIC plays an incredibly important role in both stabilizing the U.S. banking system and in protecting the money of everyday Americans.

While bank failures might be relatively rare today, they do still occur: According to the FDIC, there were 557 bank failures from 2001 through 2019, with many of these occurring during the Great Recession in 2008. It is therefore critical that individuals act with due diligence when choosing to open a checking or savings account with a bank.